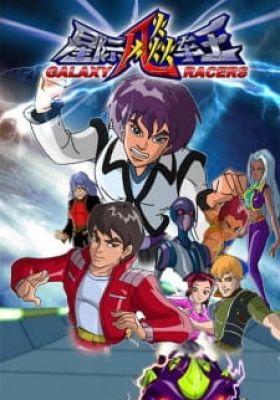 Set in the future on the Yellow River Planet, the realm of car racing has advanced beyond Formula One - into the domain of the Galaxy Racers. Riders steer their simulator-racers which remotely control the actual customized speedsters hurtling around a track.The hero, a teenager named Roy, was born to race and aspires to be the King of Galaxy Racers. But his guardian, his grandfather, sees a threat from and great danger in the evil and greedy Taz, the CEO of the Titan Space Navigation Auto Group which seeks to swallow or destroy all competitors, and whose Mosha Racing Team would just as ruthlessly run over and crush Roy under its thundering wheels. He arranges for him to join the good guys in the Matela Racing Team to race for the highest honors.Many years ago, Ray’s father, Dr Renault, worked for the Titan Group and he invented the Galaxy Racers but he was against CEO Taz’s destructive greed. He tries to escape - and disappears! Monopolizing the technology and construction of the Racers, Taz, the Titan Group and Mosha Racing Team swallowed, crushed and beat all rival companies, racers and teams.Desperately, Ray’s grandfather uses a secret design hidden by Dr Renault from Taz and builds for him a superior racer, The Lion King. But he has first to learn the skills and garner experience from racing at the highest levels. To acquire these qualities plus humility and resilience, he relies on his Matela friends who have their own cool cars, to help him. But arrayed against them are the Mosha baddies and their menacing machines.In a series of hair-raising and nail-biting races with thrills & spills, growling engines, screeching wheels, burning rubber, smashing metal against metal, intense bitter rivalry, persevering friendships & loyalties forged in grueling teamwork and battle, Ray and Team Matela must conquer their fears and overcome the arrogant and powerful Team Mosha which uses cheating as a winning strategy.Will justice prevail or evil triumph? Find out on The Galaxy Racers on a track near you!