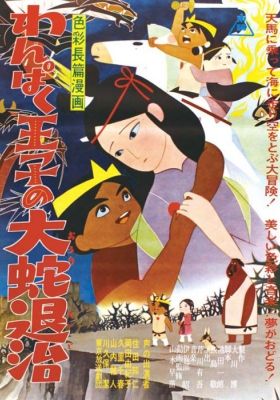 Susanoo, the youngest child of the creation gods Izanagi and Izanami, is a mighty warrior, easily able to defeat tigers with his bare hands. After his mother dies, Susanoo is devastated. Determined to travel to Heaven to find her, he carves a boat out of a tree, and along with his rabbit companion, Akahana, he prepares to cross the ocean. As Susanoo does not know how to reach Heaven, he first visits his brother, Tsukuyomi, leader of the Night Kingdom, and his sister, Amaterasu, leader of the Light Kingdom. While his siblings can warn Susanoo of the dangers he faces, they are unable to stop him or provide him with the directions to Heaven. As Susanoo continues his journey to the ends of the Earth, Orochi, an eight-headed dragon, awakens to stand in Susanoo's path.